We believe it is important for the pupils to learn a foreign language and Spanish is the second most natively spoken language in the world.

In Year 1 and 2 we concentrate on pronunciation and elementary vocabulary, taught through songs, rhymes, games, role play and video clips.   When the children move up to Year 3 they have a solid grounding in basic vocabulary, they can express their feelings and talk a little about themselves.

From Year 3, the children study a wide range of topics to develop their understanding of speaking, listening, reading and writing in the Spanish language. Pupils are encouraged to work individually, in pairs and small groups, sharing knowledge and practising communication. The classes provide a balance of spoken and written language and the children have workbooks to enhance their written and reading skills in Spanish.

We listen to Spanish spoken around the world as it is the primary language of more than 20 countries worldwide. Pupils learn about Spanish festivals in Spain and Central and South America.

During the summer term Year 6 pupils have the opportunity to visit Barcelona to practise their Spanish, experience Spanish culture and visit The British School of Barcelona which is part of the Cognita Schools Group.

Year 2 have had a busy morning. First, they used dictionaries to help them develop their skills putting words into… https://t.co/FNFfB06Xyw

Today is St Dwynwen’s Day, Wales’ very own version of St Valentine’s Day! Whether or not you live in Wales, why not… https://t.co/JH63DfUzdV 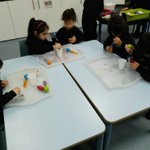